I have made a few pairs of simple turn shoes before, simple and clumsy things that were not very pretty, but worked well for medieval fashions.  When I started wear 16th century styles more, the turn shoes I had made did not go very well with my outfits, and were starting to fall apart anyways since I did not have a good understanding of how to make them well.

When I looked at 16th century shoes, both extant and in portraiture, they looked way too complicated, so I bought the closest thing I could find and decided that would have to be good enough.

Both images by Cesare Vecellio in his book Degli habiti, antichi et moderni di diversi parti del mondo (Of Costumes, Ancient and Modern, of Different Parts of the World), published 1589.

Flash forward a few years.  A few of my current projects require shoes that are not available as ready-made options (which has expanded greatly in the past few years, so I cannot just buy them.  The two above are good examples: low-medium height chopine, an over shoe with a slight wedge shaped heel, called a pianelle by the Vecellio, and a white slipper shoe, likely of a light weight leather and meant to be worn inside, or with pianelle outside.

I have long had an eye on Francis Classe’s super fabulous shoe reference site Raised Heels.  It’s a wonderful place, and I really cannot overstate how useful it is for anyone interested in making 16th century shoes, including flat styles.  His site gave me courage to try to make my own. 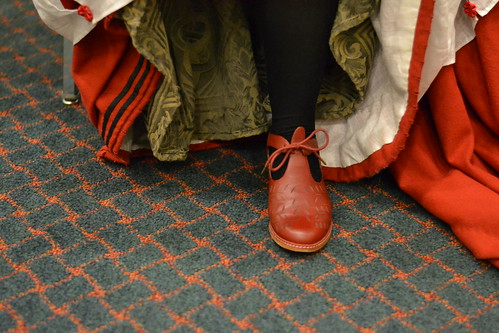 Speaking of which, I just want to mention quickly that I love my pair of American Duchess Stratford heels, designed by Francis Classe!

Armed with his lessons, my husband’s copy of Stepping Through Time, and every youtube video I could find using the search “making leather shoes”, I started to collect the supplies I would need to make lasted shoes of my own.

To make lasted shoes, I clearly needed lasts!  I found the process of obtaining a last very confusing.  Many places  I looked at online only sold in bulk, had confusing sizing structure, were sold-out in sizes I needed, or made of materials I didn’t want (lots of plastic!).  I saw a few tutorials on making your own lasts, but most of those involved making a mold of your foot and casting plaster into it.  I was afraid of doing that since I need to be able to nail the sole to the last, and I feel like plaster would crack.

As far as I can tell, your best bet for a single pair of wooden lasts is from Ebay or the vintage section of Etsy.  I got a pair of US women’s size 7 1/2 extra wide, and 8 regular, figuring that it’s always best to have more options.

I got a curved awl and awl handle, leather glue, lots of leather, leather needles, sinew, nails, hammer, craft knives and such from my local leather supply shops, and my husband’s workshop.

The other specialty tool I wanted to get online was a pair of lasting pliers, but due to a little mix up with my ebay seller, I ended up getting them after this project was done.  I have seen them called lasting pliers, pinchers, and pincers, so use those terms if you are searching for your own pair.

With my tools on hand, I grabbed one of the lasting pairs (7.5 Wide) and started taping away. I wish I had thought to wrap it in food plastic wrap first, but it was not a big deal that I forgot it. Once the last was all taped up, I marked where the sole, vamp, and quarter would start.

Since this is my first time using this construction method, I figured I would make a practice pair, not one of the Italian ones I would eventually like to make.  I based my pattern off of the simple Mary Rose style shoes.

I also played around with some decorative markings, although I did not actually add any to the final product. Next time!

I carefully cut and peeled my pattern pieces off of the last, and cut them so they would lay flat. That is particularly noticeable on the toe, where the leather will eventually be gathered in to curve around the toes of the shoe.

I then cut out all my pieces, left and right, out of vegetable tanned leather, around 5-6 ounces for the upper and insole, 12ish for the outsole. I think that next time I should make both soles thick, the upper was about right though.

They were cut so the bottom edge was a little bigger than my blue tape pattern. I think I may have made the side seams a little bigger too, or perhaps they stretched during the process. Whatever the reason, they ended up a little too big, so I’ll keep that in mind for next time.

I used two threaded needles to go back and forth, sewing up the little side seam. I didn’t go all the way up, because I figured that would make it easier to remove the shoe later. As it turns out, it did not help enough. The shoe ended up being very difficult to remove.

This is the insole being nailed to the last to keep it from moving around. The nails are temporary and will be pulled out later.

Once the vamp and quarter were sewn together, I slipped them on to the last and nailed them under the bottom edge. These nails are also temporary. Normally, one would pull on the edge of the leather with a lasting pincer, place a nail to hold it in place, and then use the hammer part of the pincers to hammer the nail down half way. Since my pincers had not yet come in the mail, I just used my hands to pull the leather in place and a regular hammer to nail.

Nails coming out; not all at once, but only as I need that area cleared for stitching.

After the leather dried, I cut down some of the extra leather that turned under the foot, and stitched on a welt.  I used two threaded needles to stitch back and forth through the insole, upper, and welt.

My stitches aren’t the straightest, but they still seem to work.

Unfortunately, even though I thought I measured quite carefully, the welt piece ended just short of where I wanted it to, so I added a small scrap to close the gap.

With the first stage of sewing done, I cut the layers of leather even so the bottom of the foot is flat.  Or that was the idea at least.  It was actually a little concave, which might be why I see a lot of modern shoemakers include cork or more leather in between the insole and outsole.

I wet the welt to flip it down, and started to work on the outsole!

I took my blue tape pattern from the beginning and cut out a pair of soles from very thick leather.  I guessed on how much bigger than the insole it should be, the amount you see above worked out fine.

I think there are special tools for this, but with a steady hand, I traced around my blue pattern piece, then cut a narrow channel into the sole where I traced.  I cut twice, at two different angles, creating a V shaped grove in the leather.

I soaked the thick sole before hammering a couple nails into the toe and heel, to hold it still on the last.  I am not sure if this was the correct thing to do: lots of people recommend wetting thick leather before sewing it, since that makes it much more pliable, but if I nail the sole in place, I end up with black oxidizy marks when I remove the nail later.  Perhaps I am using the wrong kind of nail?

What ever the case, I then used the curved awl to wriggle up through the sole, and out the welt.

I mostly guessed at where the poke out on the welt side, which worked out fine, aside from the occasional uneven stitch.

After the outsole was done, I cut off the extra welt.  Still some cleanup work to be done on the edge to make it more even.  On the bottom you can see  the start of my heel pieces.

Unfortunately, when the time came to remove the shoes from the last, they would not come off.  I tried all sorts of twisting, pulling, prying, praying, hammering, and they would not budge!  I resorted to cutting semicircles out of the vamp, bigger and bigger until they finally came off, resulting in a lachet style shoe.  Not what I had originally intended, but it works I suppose.  I suspect that it is because I wet the upper before putting it on the last.  I don’t think it was necessary, and might have made the leather shrink and tighten around the last.

I glued several pieces together, until I reached a height that looked right on the shoe.

Right now, there’s nothing but glue holding the heel together but for extra security, I added nails, coming from both inside and out.

But that heel is still very rough, so let’s even it out.

My husband let me borrow one of his woodworking chisels for some cleanup.

Lol, there’s some of those uneven stitches I mentioned on the toe.

The sudden color change isn’t your screen!  I’ve dyed it a dark reddish brown color (many thanks to my leather working friends for letting me use their dye!), and on the bottom edge, I’ve applied wax and melted it in.  I admit, I cannot remember if I saw that suggestion from a period source or a modern one!  I’ll try to edit this later when I find out.

A few specks of glue ended up on the vamp, preventing the dye from penetrating those spots.  I suppose that’s why most people dye before they sew.

Things I would change for next time:

Next time I’ll tackle these guys!

An extra picture for those of you who like to pin :D

This outfit is based on the information gathering I did for the Antwerp Women’s Dress post.  My

As part of my Dirty Dozen largesse donation, I wanted to include some simple aprons

Yay mom’s dress!  Done now, so mom will have 4 dresses for war.

As you may or may not know, I go to MD to visit my parents