↓ Skip to Main Content
Home › Not Clothes › A Paper Crown 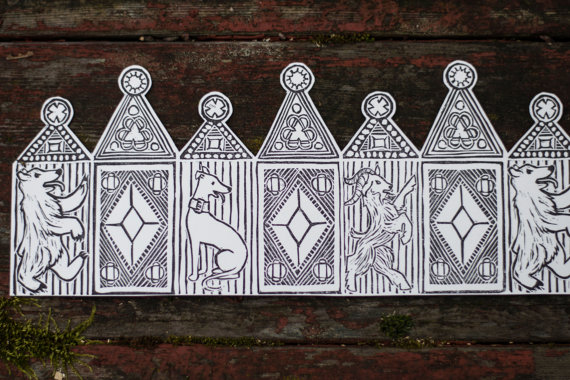 One of my fab friends, Jenny, does traditional printing of all sorts, along with book making and pewter work.  Check out her Etsy shop if you have a second: Notta Pixie Press.  She has been helping me learn a new thing: lino and woodcut printing! 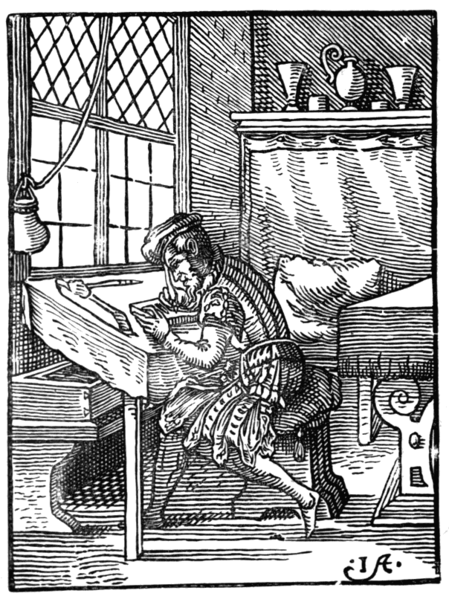 I started with lino blocks rather than wood, mostly because my local art supply store only had lino, but having tried wood since then, I am glad I started with the lino.  It is so much easier to cut than wood!  Wood has a directional grain, and gets all cranky if you try to cut it against/cross the grain.  Lino is short for linoleum, which can be used instead of wood as a relief cutting surface.  Exactly the same cutting and printing process, just a little easier :D 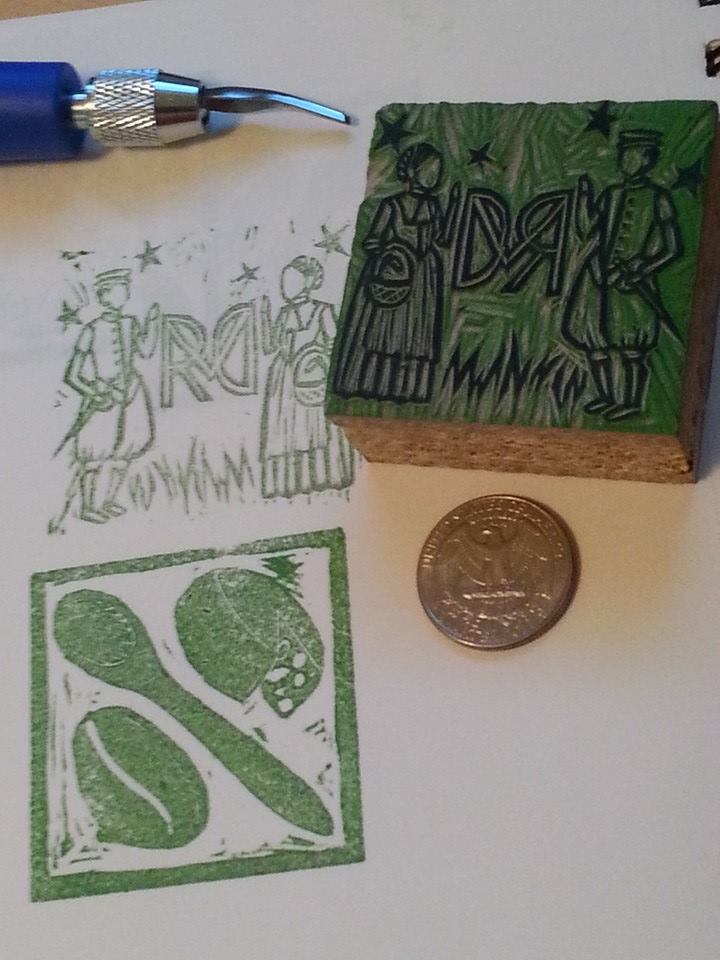 Using a Speedball lino cut tool kit (one handle with several different cutters inside), I started practicing on a couple little square blocks and inked them with some plain green stamp pad ink I had on hand.  Looks like my printing technique needs some work, but at least I have cute stamps now!

Now on to the big print project I have been wanting to do for a while: in Pieter Aertsen’s Peasants by the Hearth (1556), a young boy sits by the fire. He is tending to the food, and wears a colorful printed crown with fold marks on his hat. 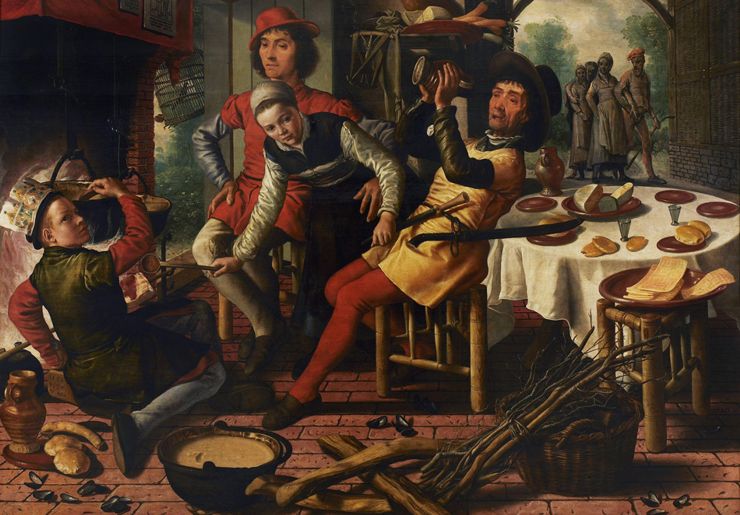 While it could be completely unique illustrated crown, I think it is more likely that it is a print.  That is certainly the more affordable option.  Woodcuts were still quite popular in the mid 16th century, although it could just as easily be a copper engraving at this point.  I am going the ‘wood’cut route for this project. 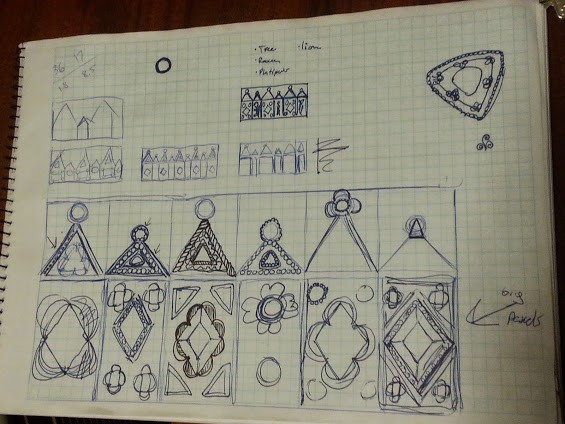 The detail on the Aertsen image is not great, so I could not easily make an exact copy.  Instead, I used the shapes and proportions I could make out from Aertsen, and paintings of other crowns from 1400-1600 to get details that would feel at home in the design.  After sketching a bit, I picked the parts I liked best and drew them on the lino block.

I must remember to take a picture of the finished crown block! At least there are some small ones below :) 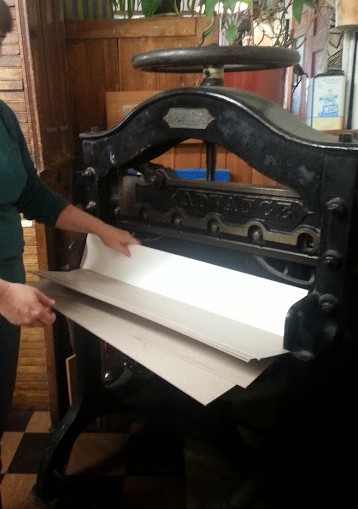 With the block completed, we were ready to print!  Jenny helped me bunches with this part.  It might be more accurate to say she did the printing part for me and I tried to be as helpful as possible.  Above, she is using this huge paper cutting machine to make a bunch of crown sized papers to print on.

Next we inked up the machine.  The black circle at the top is covered with a thin layer of black ink, and the machine does this fancy rolling and flipping motion to ink the block (visible in the middle), and then presses the paper to the block, which is not quite in the right position yet in the lower left. 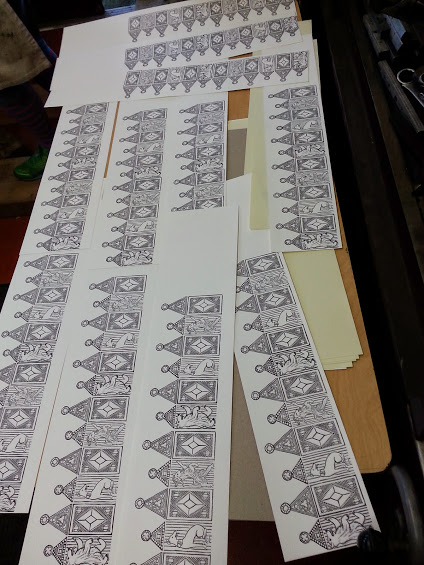 Ta-da!  Crowns are printed!  Some of the papers were shorter than others, so they only got two prints, but that will work nicely with how the crown was worn in the inspiration image by Aertsen.  I watercolored the print, trying to mimic the original, although I think I should have used a less saturated green! 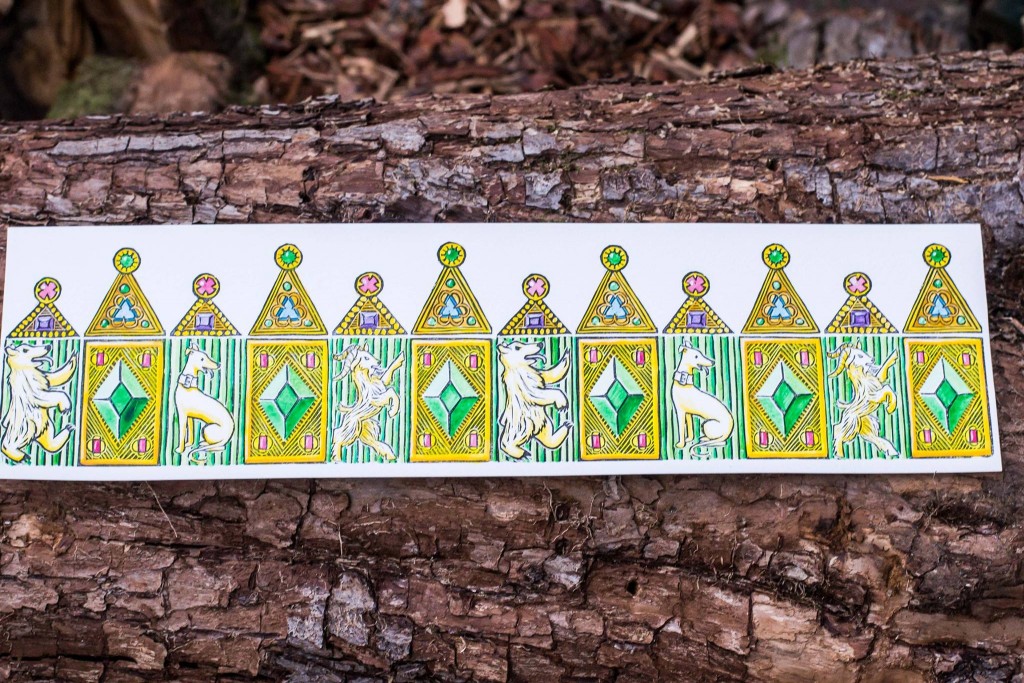 Super cute, no?  This is one of the short ones. 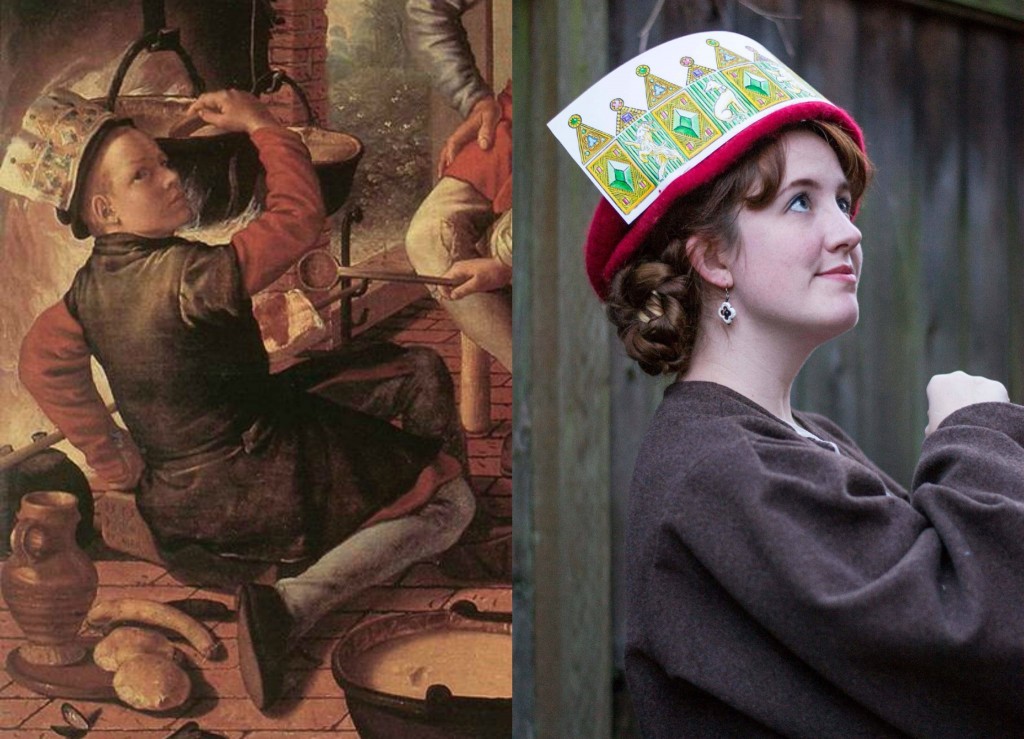 I borrowed my husband’s Brueghel style coat and the hat I bought him from 5adayknits on Etsy.  I need to get my Antwerp gown finished and take some pictures with that!

For fun, I also cut one of the crowns out around the edges, which is somewhat similar to the 17th century Twelth Night paintings. 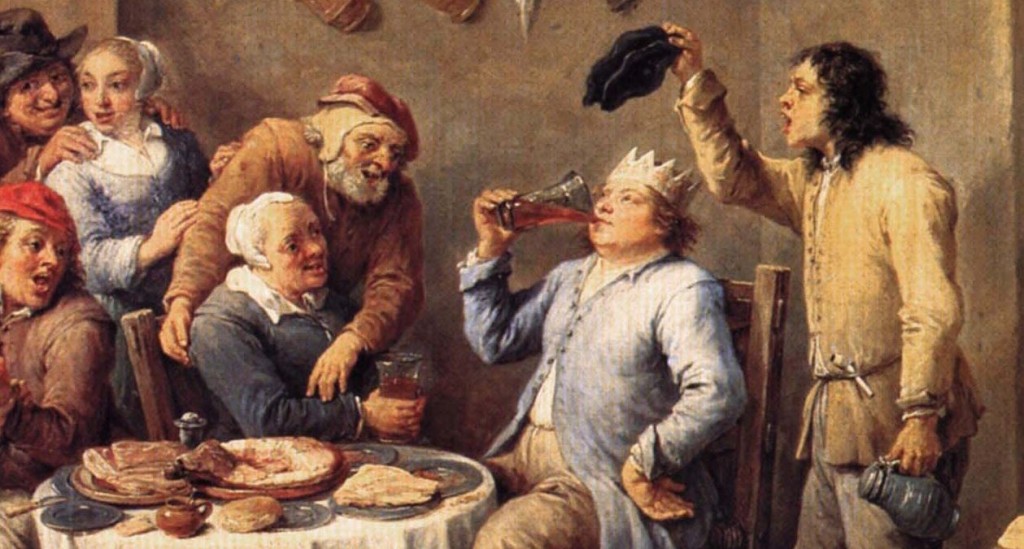 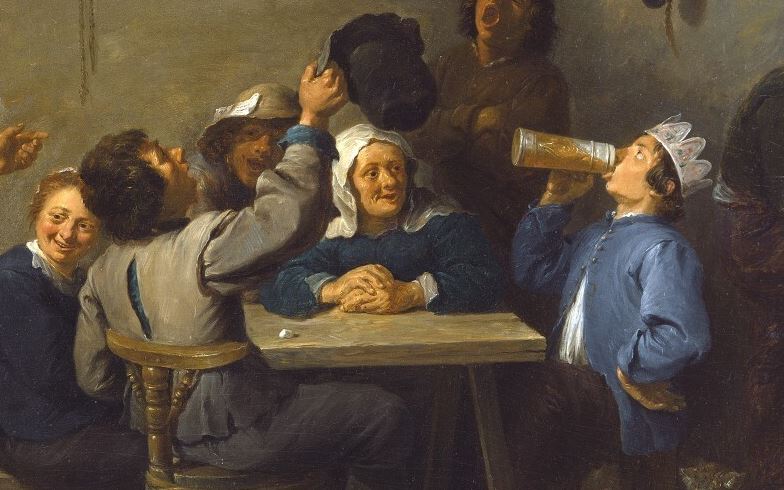 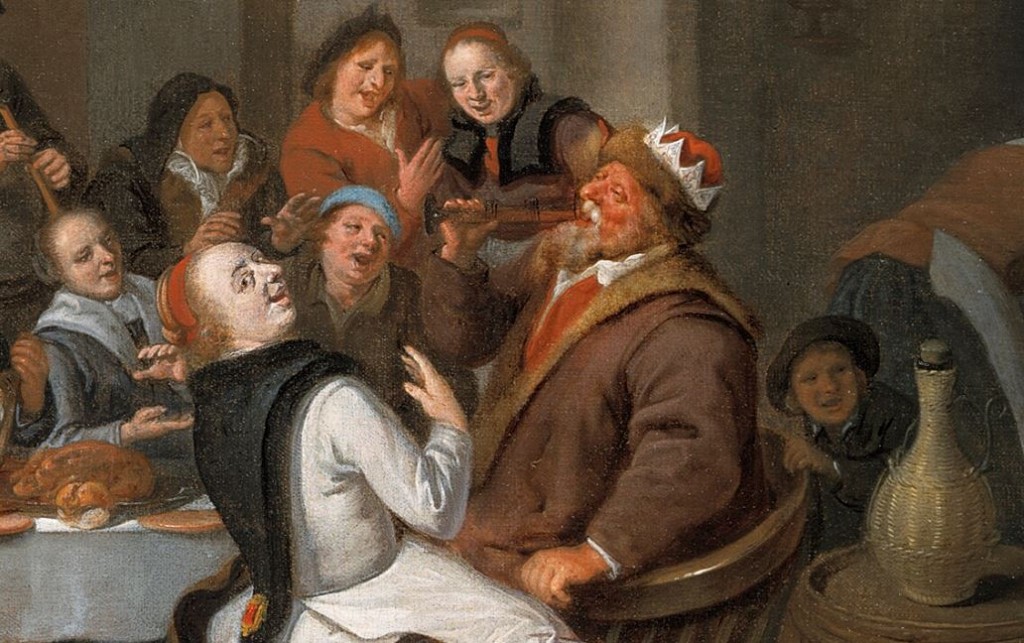 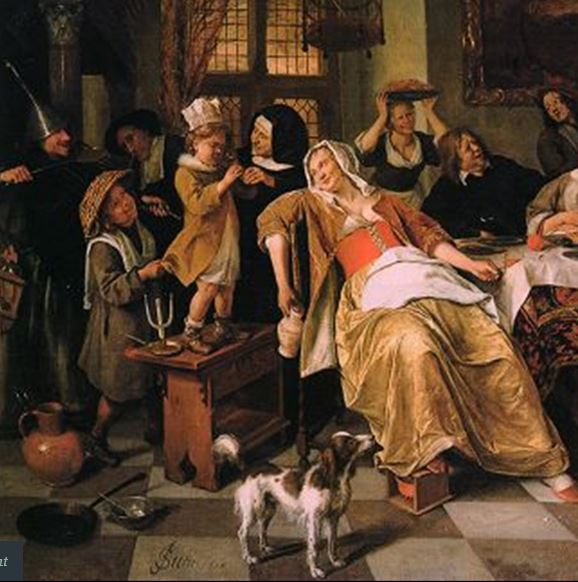 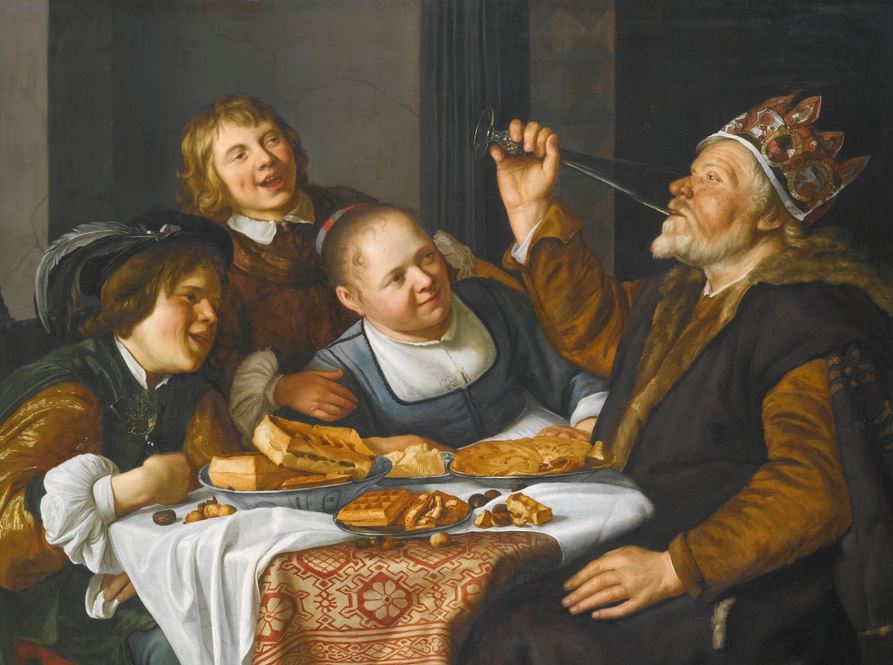 Lots of happy party kings in the mid 17th century!  It seems to be associated with 12th Night, where they had King Cake celebrations, which continue to be used today in the United States during Mardi Gras.  These sound like a great idea for a party at a recreation/reenactment event! 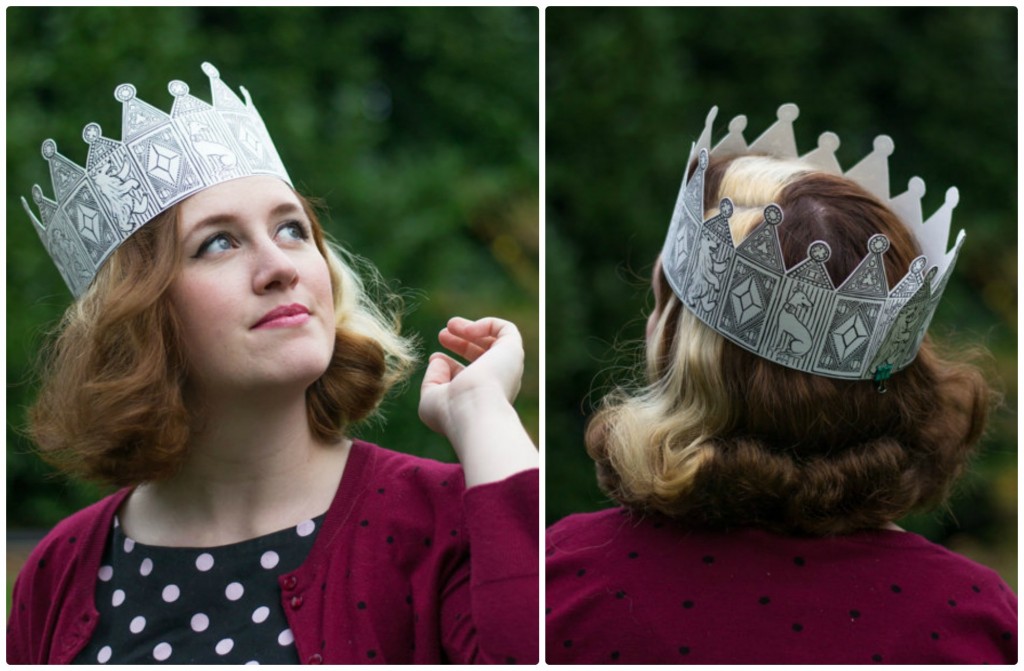 Since we printed a bunch of them and I only need a few, the extra were put up on Etsy here.

After learning bunches about block printing from Jenny, we went on to create a 16th century style playing card deck.  If you like the printing stuff, check it out here: Part 1 and Part 2.

I try to post my projects in an easy to read, dress diary type format. When I first started learning to sew historical outfits, I found dress diaries to be the most helpful learning tools. I want to contribute my projects in the hopes that they will prove just as useful for others.