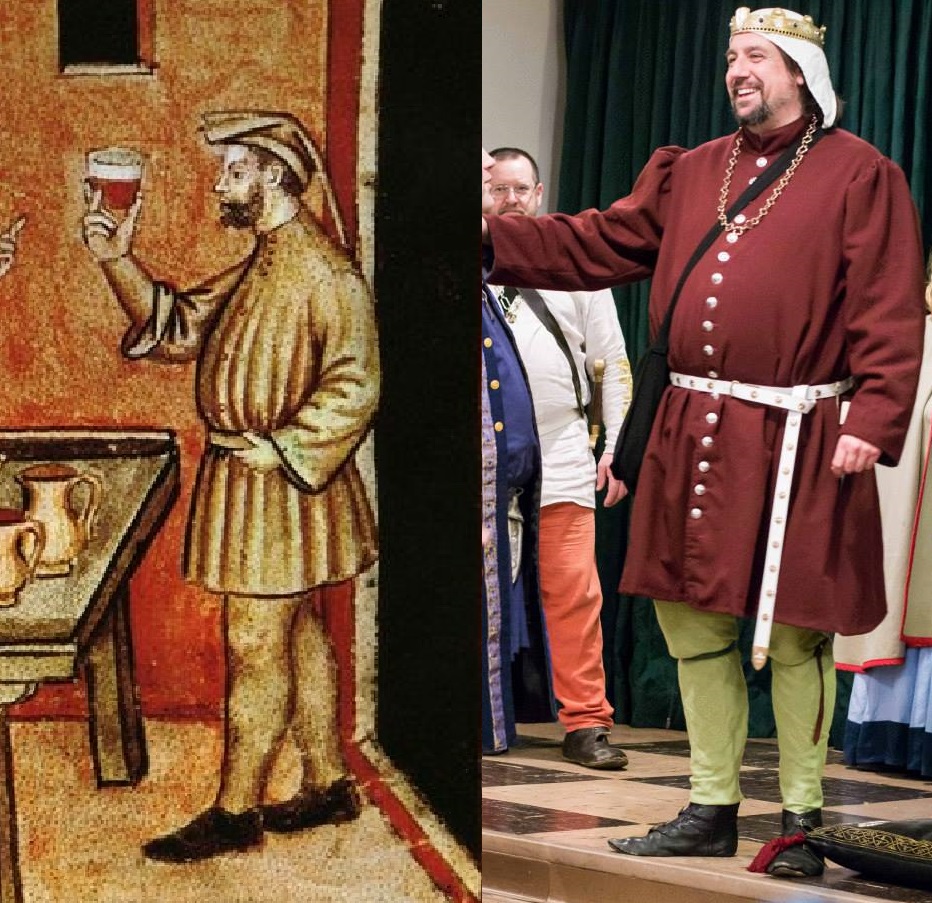 A friend of mine requested a copy of a coat he already owns.  His coat is similar to the late 14th century Herjolfsnes 63 garment, although with far fewer seams, and simpler sleeve shaping (which is why I am calling it the lazy version!).  I have actually already helped him do that a couple of years ago, but this time I took pictures!  Here’s a walk-through for anyone hoping to make something similar.

So, we start with the base cote, as modeled by two handsome gents:

He gave me the green cote and the new fabric and I got started!

I started by laying the red wool fabric down on the floor, since this project is a bit too big for any of my tables.  With the coat spread on top, you can see the approximate shape of the front panel.  It’s a little bit away from the left edge because we are going to make it four inches longer than the original.

See?  Four inches longer.  The white thing is a nifty chalk holder-marker thing I got from a local sewing shop.

The bottom edge of the coat is slightly curved, so we follow that curve, staying four inches away.  Then we stop at the side seam, but add a half inch to account for seam allowance.

Above, I have neatly folded the green coat right along it’s side seam, then chalked in the angle plus seam allowance onto the red.  Again, I have stopped just past the seam, in this case the armscye, and added a half inch for seam allowance.

Then I fold back the sleeve to expose the seam connecting it to the body piece, and follow it as best I can, all the way until it hits the shoulder.

Then we trace around the shoulder and neckline and then ta-da, our first pattern piece is done!

The front piece was cut out and then flipped around to make the back piece.  On this garment, the front and back pieces are nearly identical.  The back is only one piece rather than two, so the fabric is folded in half and the front is placed on the fold.  It stands out about half an inch from the edge (visible top left) to account for seam allowance.

The back of the neck hole is a little higher than the front in most garments, modern or historical and this guy is no exception.  With the torso parts done, we can start on the sleeves.

This is a funny piece to trace because it has gathers along the top.  First I started with the outer edge, stopping at the seams.

And then stopping again at the fold, since folds do not need seam allowances.  I lightly marked where the fold was, since I will fold the traced piece in half to cut the whole sleeve.

I followed the sleeve head as best I could, and neatened it up after I took the green sleeve away.  Keep in mind that the lightly marked fold line (left) must be straight.

We cut along the chalk line and fold it in half.  I am cutting both sleeves at once.

Using the folded half as a guide, we can cut out the mirrored other half.  Sleeves are done!

Tracing the collar piece was quick and easy!

All red fabric pattern pieces are then copied onto the grey lining fabric.  Now we have doubles of everything.

Always iron your fabric for best results, but especially when it has curled edges like this!

Once the body pieces have been sewn at the sides and shoulders, we can inset the sleeves.  These sleeves are symmetrical, which makes them a little easier to put in correctly.

You can then start pinning the excess fabric of the sleeve head to the armscye evenly all the way around, or just around the top half of the sleeve as I have done here.  Sometimes it’s helpful to do a couple rows of gathering stitches and cinch the excess down before pinning.

Sew those gathers!  I will usually remove pins right before they hit the sewing machine foot, but you can sew over them if you are slow and careful.  Repeat this process with the other lining sleeve, and the two red outside fabric sleeves.

Sew the collar piece along the sides and top, but leave the bottom open so you can flip it right side out and iron it.  It was being a little fussy, so I pinned it flat before ironing it (be careful to not iron the pin heads if they are plastic!).

Sew the happy new collar to the neckline of the coat.

Now we can start joining the lining to the fashion fabric!  In the picture above, I have the collar piece sandwiched between the lining and outer fabric necklines.  In cases like this, I like to sew down one side first and then the other so I am not dealing with too many wild seams at once.

After every seam is sewn, ironing the seams open helps the final garment lay nicely.

I have bag lined the front and top half of the coat, but I like to do the bottom edge differently.  Sometimes one fabric will ‘grow’ or sag over time and create an ugly pouchy effect at the hem.  I have hemmed the two fabrics separately, with just one fold although you can do two if your fabric is particularly fray prone.

The two hems are then loosely joined with a fairly large whip stitch.  By large, I’m talking maybe two stitches per inch!  This stitch is basting the hems together so that if they must be adjusted later because of fabric growth/shrinkage, they can be easily separated and resewn.  Some folks will just do the two hems and then leave them be, but I like the extra stability of the basting stitch.

The sleeves are sewn together at the edge/cuff with a quick bit of whip stitching.

Buttonhole time!  There are many different ways to do this, but here’s one I like to do.  I will start at the same corner every time.

I will stitch an outline to the buttonhole.  This time I did a split stitch, but I will sometimes do a back stitch instead.  I use a measuring tape or sometimes the button itself to measure each buttonhole.

I mark the end of the hole with a couple satin stitches and then go back down the other side.

Now I don’t need that pin anymore so I’ve removed it.  A couple more loops around the bottom here.

I like using a seam ripper to open button holes.  It allows me to start my cut right next to the end bars, with no chance of accidentally cutting through it.

I like to stitch my buttonholes with something I have heard called a ‘tailors buttonhole stitch’.  If you enter that as a search term, you can find a large number of diagrams showing it.  It isn’t much different than a blanket stitch (which people often use instead of a buttonhole stitch) just with an extra loop, which creates a slightly more sturdy edge to cover the cut threads of a buttonhole.

The happy buttonholes are done and have matching pewter buttons made by Pembroke Historical (probably not for sale, as they are his personal badge).

The coat was completed in time to wear at the next event!

As I worked on this project, I couldn’t help but start saving images of similar medieval garments as I happened across them.  It’s a bit backwards, to make the thing and then research for something historically similar, but oh well!

The billions of Tacuinum sanitatis images are pretty useful for finding this coat and variations on it, particularly in the sleeves.  I like the Nova 2644 version, although I am having trouble finding a link to the whole book.

I am pleased that the date of the Herjolfsnes 63 coat and the Tacuinum Sanitatis images match up nicely, approximately 1350-1400s.

Consider following me on Facebook, I have many more project posts coming up shortly! 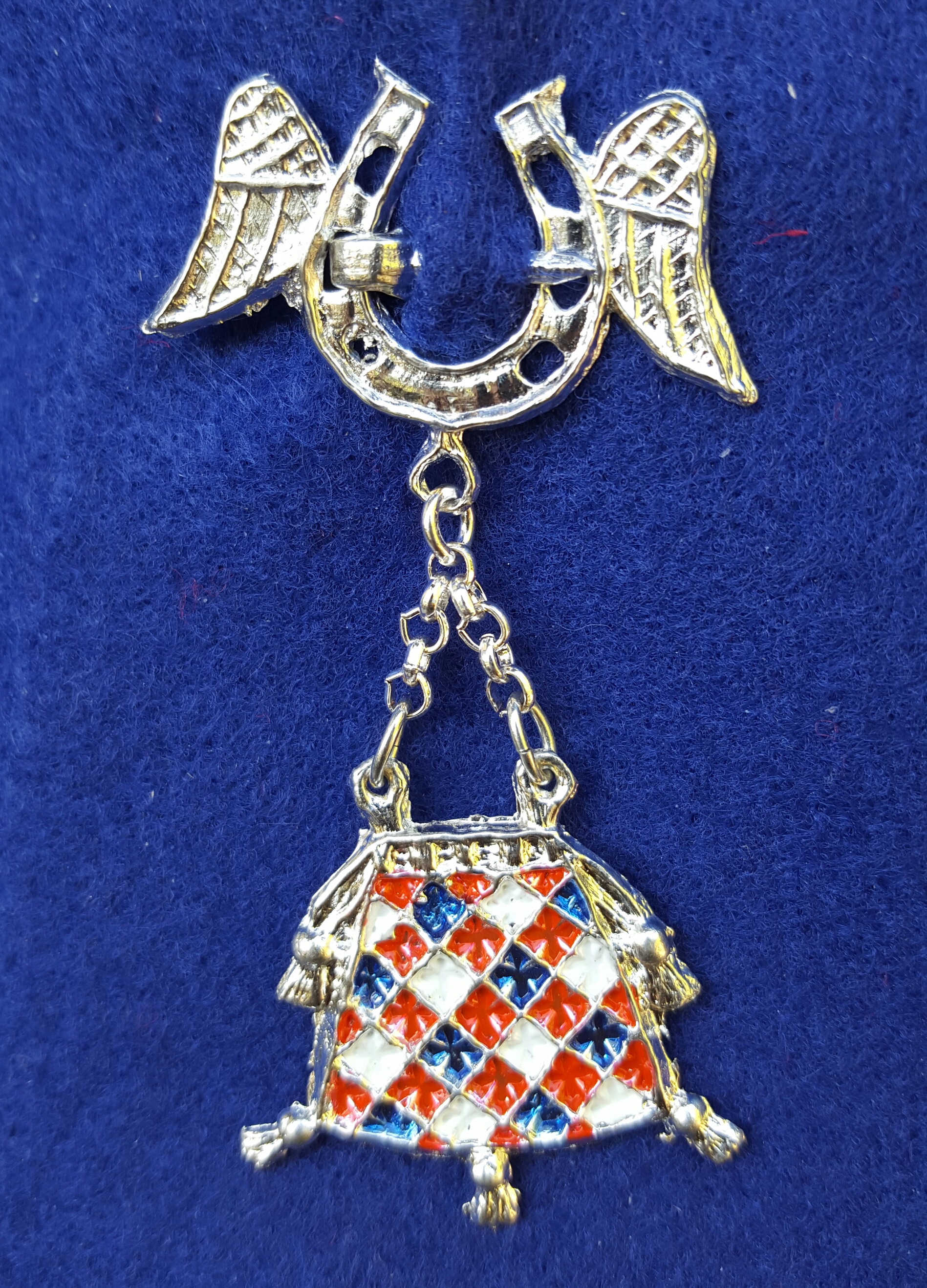 Earlier this year, our local medieval dress up group was going to hold a big 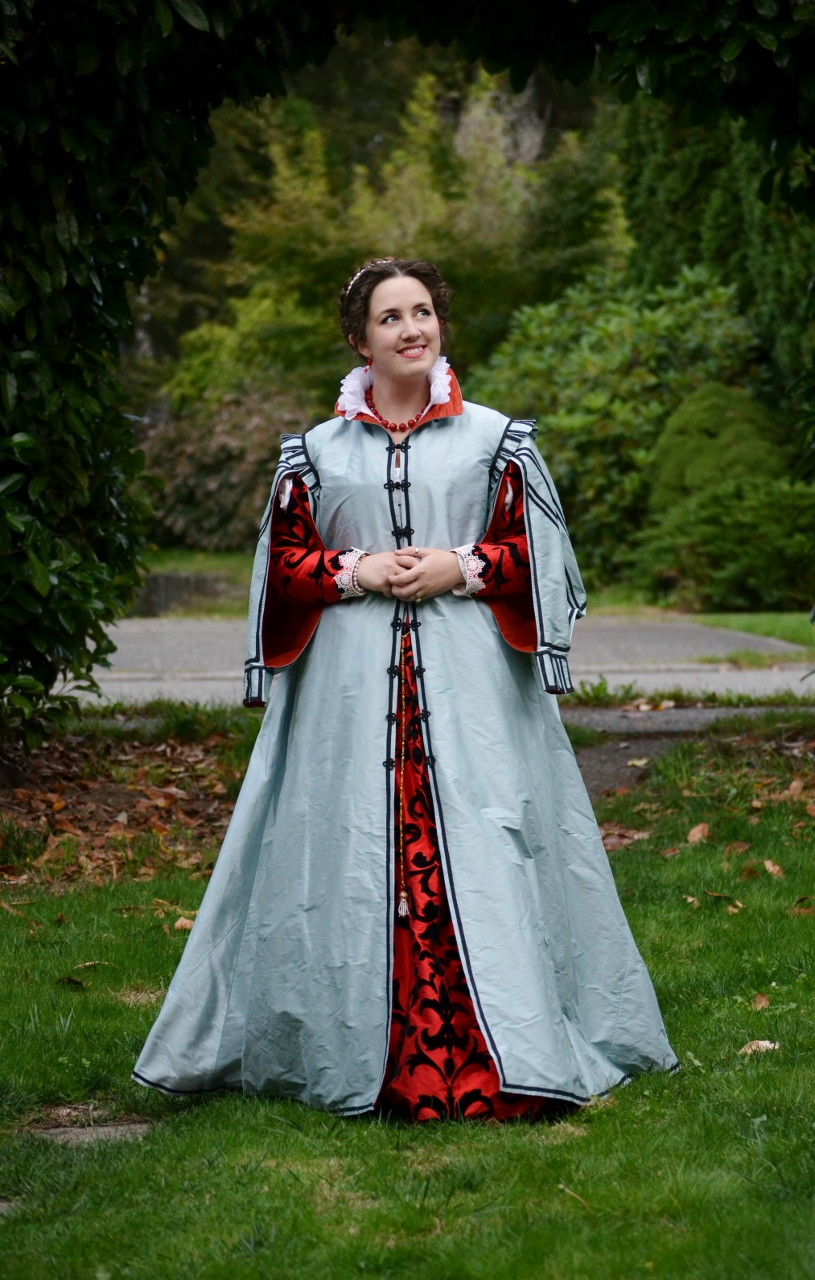 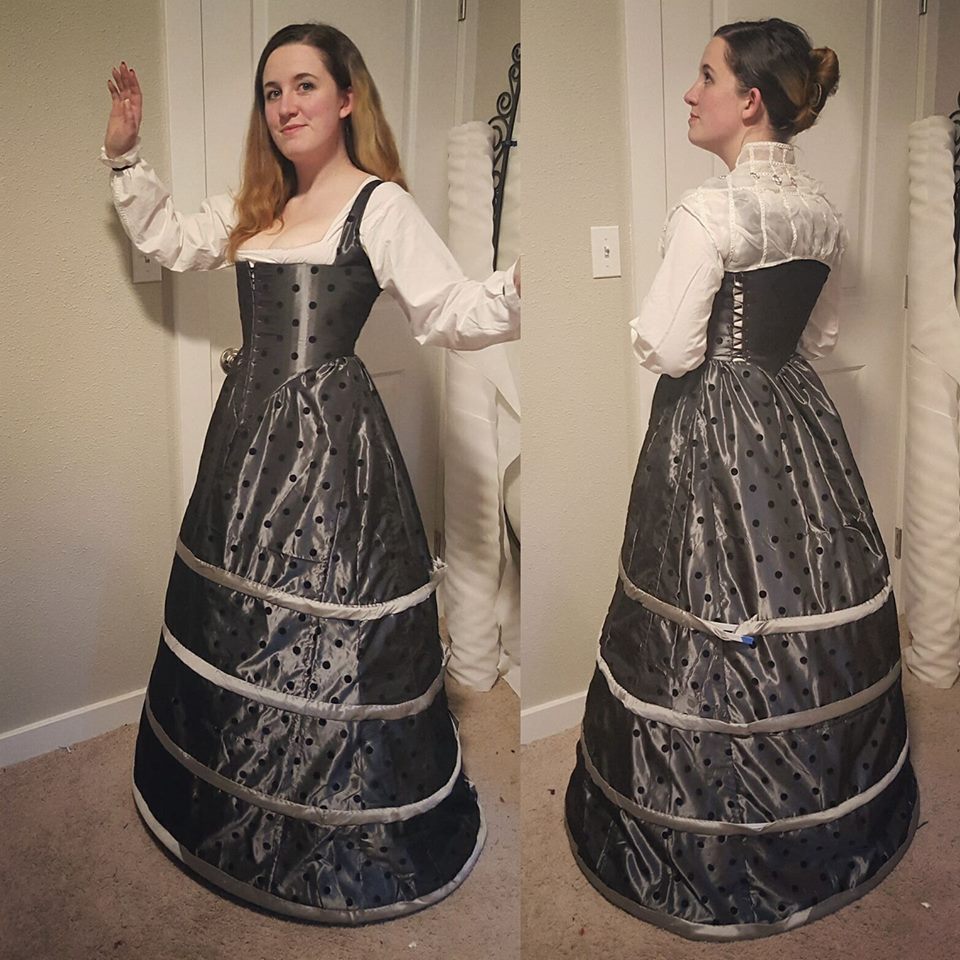 I have never made or even worn a hoop skirt, but after seeing how underwhelming 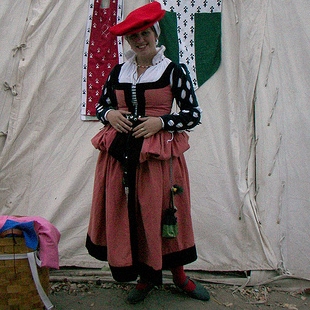 I wrote a nice long diary post about this dress, and LJ (I originally wrote this